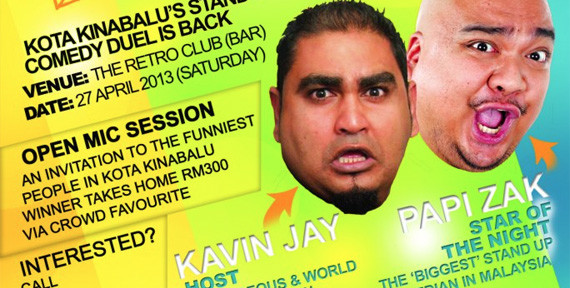 Let’s be honest, there’s a lot to laugh about in Kota Kinabalu: people’s driving, what politicians say and a the price of a pint of Guiness for example.

The comedy scene, ironically, was no laughing matter, but that’s about to change.

Refer to our Events Page for the latest Standup Comedy Events.

Up until recently Kota Kinabalu had no comedy scene other than your drunk friend during beer drinking session.

Sure, we’ve seen the highly paid talents from KL and Singapore in Sabah at private functions or charity events before, but nothing regular or generally accessible to the public.

Sabahans like to laugh as much as the next guy, so it was only a matter of time before the first standup comedy show came to our shores.

Last year we saw the first public event take place in Kota Kinabalu, where a bunch of comedians from KL scoped the scene and discovered a market hungry for comedy.

Based on the success of that event, they were back again earlier in 2012 and performed to a sell out-crowd at Lava Resto Bar, after which they returned in November 2012 to even greater fanfare.

But what about Sabah’s hidden talents?

On one not-so-quie Friday night in November 2012, the You So Funny Vol 1 set the stage for prospective standup comedians to showcase their talents.

Amateur standup comedy wannabe’s got to take the mic and was encouraged to last for 5 minutes without wetting their pants or get boo’ed off (thankfully organisers banned rotten-tomato throwing).

The winner of the duel eventually pocketed RM 1,500 and the even the runner up and third place winners also bagged above RM1,000 each. There were other prizes up for grabs too, which made it a surprisingly high-stakes talent competition.

The winners also got to share the stage with the comedic pros during the Comedy Club Borneo Tour which followed later in the month.

However, that kind of generosity is ultimately unsustainable, and was a high-cost marketing gimmick. Now that initial euphoria has worn off and reality settled in, a calmer approach is needed with the establishment of a more regular, lower cost (to the organisers) open mic competition.

After all, it’s all about unearthing those raw talents with which to establish a comedy industry.

Thus, You So Funny Vol 2 returns. The birth of a home-grown comedy scene in Sabah is an encouraging development, and we hope that everybody’s funny-bone is severely stimulated and will benefit the crowd with these events.