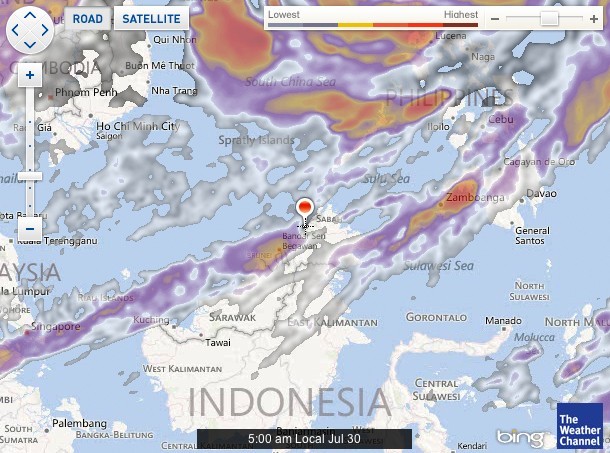 Kota Kinabalu and Sabah has thankfully only caught the tail-end of the tropical typhoon named Gener that has been pounding the Philippines over the last couple of days.

Sabah is located below the monsoon belt of the region, which means we miss the severity of storm systems that can wreck havoc on the rest of the region.

Take the weekend’s typhoon Gener for instance – while it has caused death and destruction in the Philippines, Sabah, which is not that far away, hardly noticed.

The weekend started hot and blue in Kota Kinabalu and it carried through from Saturday morning all the way through Sunday afternoon.

By around 5pm the wind had picked up, blowing in from the ocean towards the city, bringing with it a bank of angry looking clouds.

Large, sparse drops of rain quickly turned into a torrential downpour, which didn’t last for long.

It was, however, the outer edge of the tail end of typhoon Gener as it moved over the northern tip of Borneo towards the Philippines.

At 2am Monday morning, Kota Kinabalu was hit by a more severe part of the typhoon, which brought storm winds and heavy rain that rattled windows and mangled less secured roofs on a few basic structures.

But the storm apparently wasn’t that noteworthy here, as Sabah’s media seems to have not reported on anything at all (nothing to be found online, at least).

By daily-light Monday morning Kota Kinabalu was left cloudy, but bright as the storm’s core hanged over the Philippines.

Satellite images show that typhoon Gener might not yet be finished with Sabah.

For a change, those constant “cloudy with a chance of storm” weather predictions about Sabah might actually be accurate. Check out the weather page for the 4-day forecast.