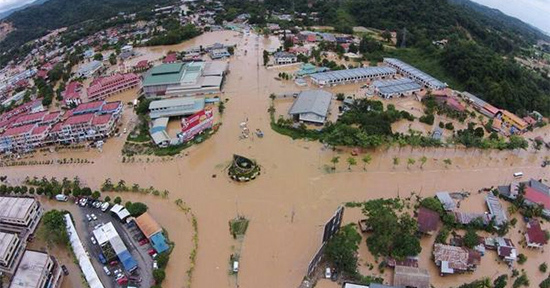 1st typhoon Phanfone and now typhoon Vongfong have been battering Kota Kinabalu and Sabah with foul weather the last week.

Not usually worried by the typhoons in the region, the recent bad weather brought the worst rain and flooding to Kota Kinabalu, locals reports say, since a big flood in 1999.

Flooding in and around Kota Kinabalu

The expected pattern of rain in Kota Kinabalu are heavy downpours lasting a couple of hours or so, either in the morning or in the late afternoon. It’s rare that it rains all day long like it has for the most of the last week.

Last weekend all-day downpours, brought by the tail end of typhoon Phanfone, caused the Moyong River near Kota Kinabalu to start swelling. The Moyong River flows from Sabah’s interior to the sea, past the township of Donggongong in the heart of Penampang.

When rains constantly like that, the local infrastructure reveals its limitations with flooding in areas with poor drainage, and inevitable landslides, usually involving important roads.

By Tuesday the river flooded and up-to-chest-deep waters in Donggongon caused widespread damage to property in the area.

Following the heaviest of Phanfone’s downpours, the flood-level subsided, but more rain brought on by typhoon Vongfong has kept the river’s level high and flooding persist in some areas.

The Tabunan landslide, newspapers reported, is catastrophic as it took out a large section of road along with it. Although no deaths or injuries were reported, repairs to this important access road are expected to take months, leaving much longer detours as the only way to reach Tambunan.

The landslide on the way to Ranau was less severe and a single lane of traffic could move past the affected area within hours of the incident. Landslides along the Ranau road are not uncommon and it seems like it’s been in a perpetual state of upgrade and repair for most of the last decade.

Typhoon Vongfong, currently brooding to the east of the Philippines and slowly moving towards Japan, is expected to continue causing downpours until Sunday, which weather forecasts says it might clear up and perhaps even turn sunny.

Most tourist attractions and activities are operating as usual, although road transport might take a little longer than usual and activities that require sea access will be assessed based on prevailing sea conditions.

Refer to SabahBah’s Weather Page for general weather information and a 7-day forecast of things to come.